As appeared in The Times of India on 26 August 2016 by Shalina Pillai.

BENGALURU: Qwikcilver solutions, gift card technology and prepaid solutions company, has launched a consumer to consumer gift card trading exchange marketplace for consumers. This allows users to convert their unused or partially used gift cards to cash. Buyers, on the other hand, will be able to purchase gift cards at special prices.

We had been developing this for the past eight months and are launching this in time for the festive season. We got a number of feedback from our customers. We are bullish that it has the potential to drastically increase the number of gift card users in India. With the Indian Gift Card Industry growing at 300% annually, this would help to further scale the category across a new segment of Gift Card users,” said Pratap TP, co-founder and CMO, Qwikcilver.

The company, which recently raised funds from Sistema Asia Fund, the proprietary fund of Russian conglomerate Sistema, has partnered with over brands enabling access to 5000+ stores and portals’ including retail chains, entertainment platforms, travel partners and leading currency providers.

Qwikcilver’s consumer-focussed gifting app, Woohoo, would digitize the listed cards, Pratap added. “Once the seller lists their physical gift card on the platform, the card gets disabled and a new electronic version of the same is created and gets listed on the Woohoo Marketplace,” he said. It will also allow the users to convert loyalty points from banks and NBFCs to digital gift cards and cash.

Are you one of those saddled with too many gift cards and looking at ways to get rid of them. Don’t let them go to waste: there is now a place where you can trade them for cash.

Qwikcilver Solutions, a leading gift card technology provider, has come up with a platform that enables consumers to turn their partially used or unused gift cards into cash by listing them on the Woohoo gifting app. 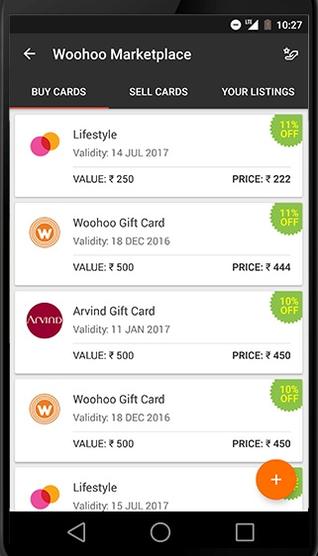 They will also be able to convert loyalty points, generated from loyalty programs of multiple banks and NBFC channels, to digital gift cards, which can subsequently be sold on the newly launched Woohoo Secondary Marketplace. Once the card is sold, the money is credited directly to the seller’s bank account.

In order to obviate possibilities of misuse, all the listed gift cards are verified and authenticated in real time in the backend, said Pratap TP, Co-Founder & CMO, Qwikcilver.

Customers, who have physical gift cards, need not have to ship them to the buyer. Once customers list their physical cards on the platform, they get disabled and a new electronic version of the same (with the value and validity intact) gets created and listed, which can then be purchased by someone who is looking for a gift card.

The platform also allows sellers to change the price of the card, or even pull it off before it’s sold.

Stating that it’s India’s first fully integrated consumer-to-consumer marketplace for selling and buying gift cards, Mr Pratap said the launch of the platform ahead of the festival season is expected to give a further impetus to the Indian gift card industry that is growing at 300% annually.

There are over 150 brands and more than 5,000 stores and portals on board Woohoo, which is available on Android and also on the web. It allows customers to redeem the gift cards either at online or offline stores. Woohoo comes from Qwikcilver, the company whose technology works in the background powering the gift card schemes of a large number of online and physical outlets.